2The University of Northampton
School of Science and Technology, UK

This paper was was published in the Transportation Systems in Buildings Journal Vol 2, No 1 (2018).  This web version © Peters Research Ltd 2014.

In these systems, the interaction between the cars and cabins affects the quality of service for passengers. Departure delays occur when passenger loading and unloading times or the sequence of stops required to serve passengers is not the same. The consequence is that cars and cabins delay each other’s departure. Departure delays can also occur in lift systems with a single car and cabin per shaft, for example when destination calls are registered at a significant walking distance from the lift lobby.

To include departure delay in an assessment of quality of service, definitions of passenger and cabin departure delays, and a method to measure these delays are required. This paper describes the different types of departure delays and their causes. This provides metrics which can be applied in lift planning and dispatcher design.

A passenger’s journey consists of two different phases (see Figure 1-1), waiting for the lift at the arrival floor, known as waiting time (WT) and the travelling time inside the cabin, known as transit time (TT). The sum of WT and TT is called time to destination (TTD) [1].

Most modern lift controllers have intelligent door dwell time algorithms. The presence of passengers is detected by the photoelectric door protection devices. If the door beams are interrupted, the control system assumes that passenger transfer is occurring, and the doors remain open.

In multi car lift systems (MCLS), multiple lift cars or cabins share the same shaft, guide rails and shaft doors [2]. Systems with more than two independent lift cars are currently in development [3]. Existing double deck lift systems have two mechanically coupled lift cabins. Departure delays in multi cabin systems occur when the loading/unloading times of the cabins are different, the number of stops is not equal, or one cabin blocks the way of another [4]. An example is illustrated in Figure 1-2. Figure 1-3 shows a simple example of a leading car (D1) delaying a following car (D2) because of stops. In a MCLS cars may delay departure to avoid collision [5, 6]. The dispatcher may consider departure delays. They should be minimised, although in special instances a departure delay is the only option [7]. 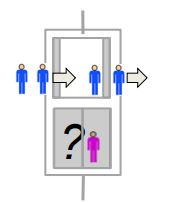 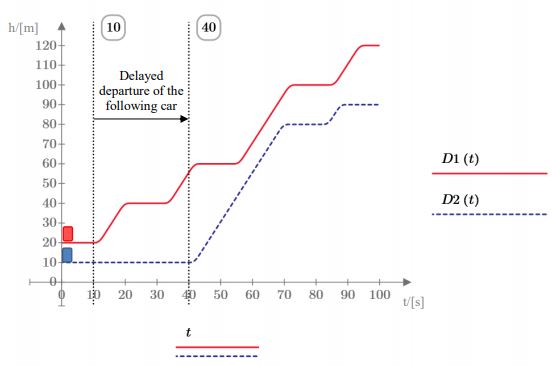 Figure 1-3: Delayed departure of the following car in a MCLS

Departure delays are sometimes initiated by the dispatcher. In up-peak traffic conditions it can be beneficial to delay a car’s departure from the lobby to wait for additional arriving passengers so that the cabin is filled to a higher capacity factor [8, 9]. It is recommended that passengers should not be held at the lobby for more that 10 to 15 s [9].

Delays may occur if passengers need to walk to an allocated and arriving lift car. In destination control systems, the walking time from a call input station to the allocated cabin (see Figure 1-4) is part of the waiting time of a passenger if the cabin has not yet arrived. As the walking time is part of the waiting time it can be considered as occupied waiting time which is less painful [4]. However, a passenger walking from a call input station to a cabin that is already standing with open doors at the arrival floor, delays the departure of the lift and any passengers who are already inside the cabin. 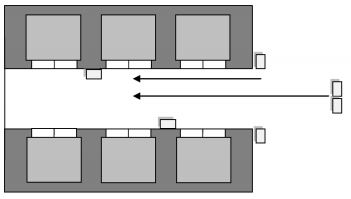 A false stop is a stop where the doors open and close without any passenger transfer (see Figure 3-6). A false stop occurs if a waiting passenger walks away before the lift arrives [4]. The door dwell time during a false stop is a departure delay for passengers already inside the cabin. False stops can occur in multi car lift systems if an empty cabin is shunted (moved out of the way) with a car call initiated by the lift control system to allow another cabin to reach its destination. No passenger is affected, so there is no contribution to departure delay. 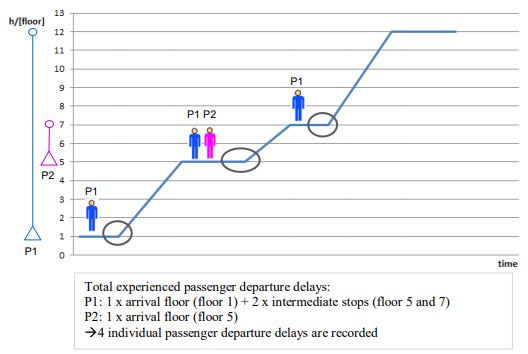 The passenger departure delay with open doors (PDD) is the period of time after passenger transfer is complete until the doors begin to close where there is one measurement for each stop experienced by the passenger. PDD is illustrated in Figure 3-1.

In Figure 3-2 the PDD is extended because of traffic delays. For example, the dwell time may have been lengthened because another cabin blocks the way of the cabin in a MCLS. Doors are held open for better passenger comfort compared to blind delays with closed doors.

Note 1: If there is a pause in passenger transfer, but the transfer re-starts before the doors start to close because it is less than the door dwell time/door closing delay and it is shorter than a “passenger transfer pause threshold” (PTPT), the departure delay does not start until the end of the final passenger transfer. This is illustrated in Figure 3-3. A reasonable value of PTPT is 1 second.

Note 2: If there is a pause in passenger transfer without doors starting to close because of a traffic caused delay that is longer than or equal to a “passenger transfer pause threshold” (PTPT), for passengers already inside the cabin the departure delay includes the time during which there is no passenger transfer (passenger detection beams cleared). This is illustrated in Figure 3-4.

Note 4: If there is a false stop or passenger transfer finishes before the door is fully open, the time between when the doors are fully open and the time when the doors start closing is considered as departure delays for passengers inside the cabin. This may include door dwell time and traffic caused delays as shown in Figure 3-6 and Figure 3-7.

Note 5: If the passenger transfer is delayed e.g. because of walking times from the call input stationto the already waiting cabin, the delay is included in the departure delay for passengers already in the cabin if it is longer than a “passenger transfer pause threshold” (PTPT). This is illustrated in Figure 3-8.

In a multi cabin lift system blind passenger departure delay can be extended because of traffic, see Figure 4-2.

Note 6: In systems with multiple cars in the same shaft, where one car is delayed by another and the doors do not cycle during that delay, the departure delay begins as soon as the cabin stops and ends when the cabin starts to move again. This is illustrated in Figure 4-3.

Passenger departure delay (PDD) is a passenger-centric measure, useful in assessing the quality of service from the prospective of the passenger. It is also helpful to have related system based measures for delay [14], cf. passenger waiting time and system response times where the system response time is equal to the waiting time of the first registered landing call of an arriving passenger at a floor [8].

Histograms can show the distribution of passenger and cabin departure delays. Cumulative values and average values help to assess the quality of a lift installation.

An example histogram showing the distribution of and the average value of PDD is shown in Figure 6-1. 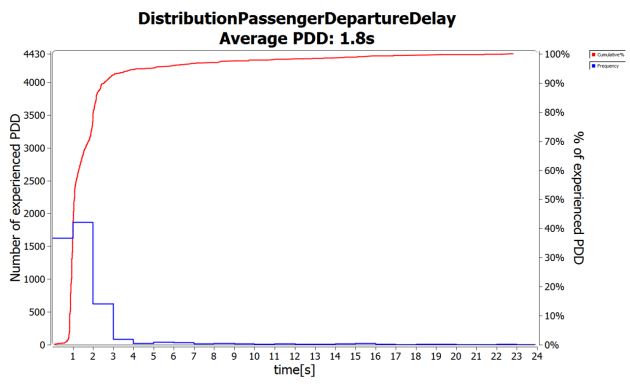 7 AVOIDANCE AND REDUCTION OF DEPARTURE DELAYS

Intelligent dispatching and good lift planning help to reduce departure delays. For example, only allowing odd to odd and even to even floor traffic for double deck lifts [16]. With two independent cars in one shaft [17], twin entrances with zoned low and high-rise operation helps to reduce scenarios causing departure delays. A planned stopping strategy for a circulating multicar lift system reduces cabin traffic jams that cause departure delay scenarios. This is demonstrated by the effective application of MCLS’s as shuttle lifts [18].

Intelligent door dwell times supported by additional sensors detecting passengers and passenger movement may reduce departure delays. By optimising start delays, blind departure delays can be reduced if they are not caused by traffic.

Richard Peters has a degree in Electrical Engineering and a Doctorate for research in Vertical Transportation. He is a director of Peters Research Ltd and a Visiting Professor at the University of Northampton. He has been awarded Fellowship of the Institution of Engineering and Technology, and of the Chartered Institution of Building Services Engineers. Dr Peters is the author of Elevate, elevator traffic analysis and simulation software

Rory Smith is Visiting Professor in Lift Technology at the University of Northampton. He has over 47 years of lift industry experience and has been awarded numerous patents.

We use cookies to ensure that we give you the best experience on our website. If you continue to use this site we will assume that you are happy with it.Ok