This paper was presented at ELEVCON HONG KONG 1995, The International Congress on Vertical Transportation Technologies and first published in the IAEE book “Elevator Technology 6”, edited by G. C. Barney.  It is reproduced with permission from The International Association of Elevator Engineers.  The paper was republished by Elevator World (April 1996) and Elevatori (May/June 1996).  At the time of writing Richard Peters was working for Ove Arup & Partners, and enrolled on the Engineering Doctorate program at Brunel University.  This web version © Peters Research Ltd 2009.

In this paper the author considers lift kinematics, the study of the motion of a lift car.  Ideal lift kinematics are constrained by human comfort criteria which limit the maximum acceleration and jerk (rate of change of acceleration) that are acceptable.  Equations are presented which allow ideal lift kinematics to be plotted as continuous functions for any value of journey distance, speed, acceleration and jerk.  Applications include generation of motor speed reference control curves.  Supplementary results  include  journey time  and formulae for  use in lift traffic analysis.

Microprocessor controlled variable speed drives can be programmed to match reference speed profiles generated through the study of lift kinematics.  Examples of these speed reference curves, similar to those shown in Figure 1, are sometimes presented in lift manufactures’ sales literature as a demonstration of the fast, comfortable and efficient lift transportation available for a particular drive system. 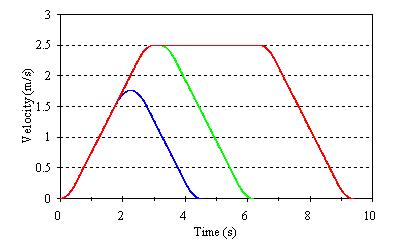 H D Molz presented the first major work in this area in 1986.  In his paper, On the ideal kinematics of lifts (2) (in German) he derives equations which enable minimum travel times to be calculated, taking to account maximum values of jerk, acceleration, and speed.  If the lift trip is too short for the lift contract speed or acceleration to be obtained, the maximum speed and acceleration attained during the trip may be calculated.  Some other points on the ideal kinematic curves are calculated.  This paper was edited by G C Barney and re-published (3) by Elevatori in 1991 (in English and Italian).

In Elevator Trip Profiles (5), J Schroeder presented a computer program that calculates the maximum speed, and minimum journey time that a lift can achieve for given flight distances if there is no speed limit.  This produces interesting observations such as it would take a total trip of about 17 floors for an 8 m/s lift to reach its full speed.

In Elevator Electric Drives (6) G C Barney and A G Loher suggest a computer program based on H D Molz’ equations.  This is reproduced in CIBSE Guide D, Transportation Systems in Buildings (1).

The author has derived equations which allow ideal lift kinematics to be plotted as continuous functions for any value of journey distance, speed, acceleration and jerk.  Supplementary results include journey time formulae for use in lift traffic analysis.  The remainder of this paper is a discussion for the author’s research.

Conditions A to C are represented graphically in Figure 2.  Each of the three conditions is divided into time slices, beginning and ending at each change in jerk or change in sign of acceleration.  Functions of jerk were written down for each time interval, then integrated to give functions of acceleration, speed and distance over time.  The end conditions of each set of functions provided the start conditions for the next time slice. 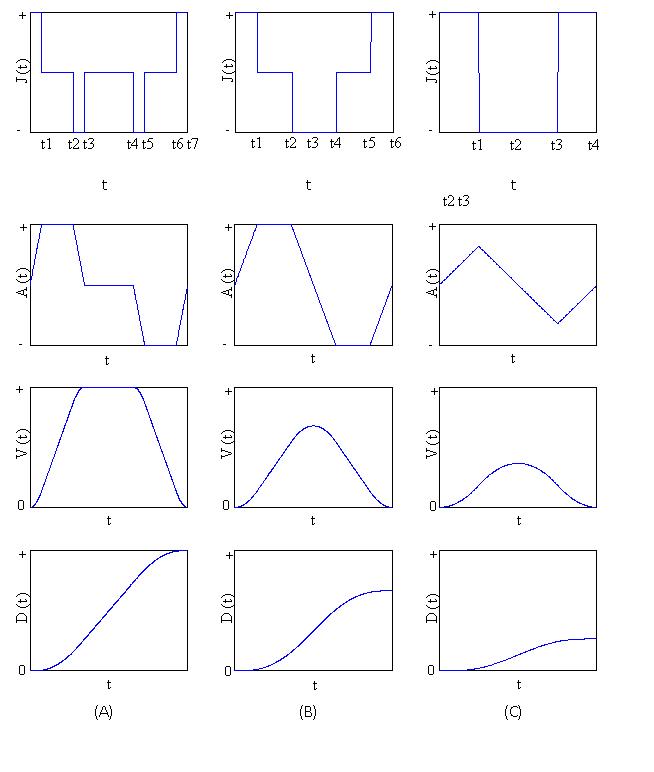 Formulae were derived to establish which of conditions (A), (B) or (C) apply given journey distance, lift speed, acceleration and jerk.  The derivation is recorded in reference (7).  The mathematics is relatively complex and laborious, but was aided by use of mathematical computer software (Mathcad version 4.0 from Mathsoft Inc.) which has a built in symbolic processor for equation solving.

The complete set of ideal lift kinematic equations is given in appendicies A to C.  These equations may be implemented in a programming language such as Basic, Fortran, Pascal C++, etc.  An example part of the derivation for condition (A) is reproduced in section 3.2.

3.2 Example section of derivation for condition (A)

For motion during time period 0 ≤ t ≤t1, referring to Figure 2(A) we can write down:

The velocity can be determined by integrating the acceleration:

The distance travelled can be determined by integrating the velocity:

The velocity can be found by adding the velocity at the end of the previous time slice to the current acceleration, integrated:

Motor speed reference curves are commonly held in software look up tables.  It is envisaged that a software implementation of the equations presented in this paper will provide a fast, flexible and efficient way of generating optimum reference speed profiles, on line in lift system controllers.

To calculate the handling capacity and performance of a lift system it is necessary to know how long it takes a lift to travel given distances.  Using the appropriate formulae taken from the previous sections, the travel time of a variable speed lift (with optimum control) can be written down as follows:

These equations are consistent with those presented by H D Molz[2], but are in simpler form.

It is advisable to add an additional time component to allow for motor start up time and any deviations from the optimum speed profile.  Depending on drive quality, Day and Barney(1) recommend that this component should be between 0.2 and 0.5 seconds.

The equations derived have applications to other kinematic problems such as power door control.

Ideal lift kinematics provide the basis for optimum speed control of lifts, an essential component for fast, efficient and comfortable transportation.  The equations derived and presented by the author of this paper further previous research by allowing continuous , optimum functions of jerk, acceleration, speed and distance travelled profiles to be plotted against time.  The results have applications in motor control and lift traffic analysis.

The author would like to thank his supervisors, lecturers and colleagues at Brunel University, Ove Arup & Partners and CIBSE Lift Group for sharing their knowledge and experience which are providing an excellent basis for research.  The author acknowledges, with gratitude, financial support from the Engineering and Physical Sciences Research Council, The Ove Arup Partnership and the Chartered Institution of Building Services Engineers.

Richard Peters studied at Southampton University.  He was sponsored by the Ove Arup Partnership and in 1987 was awarded a BSc Hons in Electrical Engineering.  After graduation he joined Arup where he participated in and led the design of electrical services for a number of major, national and international construction projects.  He has a special interest in Vertical Transportation and has published a  number of research papers in this field.  In October 1993 he joined the Environmental Technology Doctorate programme run jointly by Brunel and Surrey Universities.  His project, Vertical Transportation Planning in Buildings is sponsored by Arup and CIBSE.

APPENDIX B  Lift Reaching Maximum Acceleration, But Not Full Speed

Results apply over the range

Results apply over the range