This paper was presented at The 9th Symposium on Lift & Escalator Technology (CIBSE Lifts Group, The University of Northampton and LEIA) (2018).  This web version © Peters Research Ltd 2018

Mobile servant robots are classified as either Type 1.1 or Type 1.2 based on the following characteristics:

Type 1.1: small AND light weight AND slow AND no manipulator.

Type 1.2: large OR not light weight OR fast OR with manipulator.

1.2   Building types where robots use lifts

In hotels, servant robots are being used for room service deliveries and for the delivery and movement of housekeeping carts.

The growth of e-commerce has caused an increase of package deliveries to multi-story residential buildings.  Robots are being used to make the final delivery from the lobby to the residential unit.

Hospitals have used pneumatic tube systems for delivery of medicines and the transport of medical records.  Pneumatic tube manufacturers are now offering robots as an alternative to tubes [5].

Both Type 1.1 and Type 1.2 Mobile Servant Robots are required to achieve Performance Level (PL) d for their emergency stop function.  For all other safety functions Type 1.1 robots much achieve PL b while Type 1.2 robots must achieve PL d.

Performance Level b indicates that that the Probability of a dangerous failure is between 1 X 10-5 and 3 X 10-6.

Performance Level d indicates that that the Probability of a dangerous failure is between 1 X 10-6 and 1 X 10-7.

There are two basic types of mobile servant robots that are manufactured by several manufacturers that need to use lifts to be effective.  One type is a high mass vehicle that is referred to as a tug by one manufacturer [7].  The other type of robot is a low mass unit used for room service.

The room service robot is designed to ride in the lift with human passengers.  The mass, size, and turning envelop of the tug type robot needs a much larger lift.  Consideration should be given limiting the access of a tug type robot to service lifts.

Both types of robots have velocities of 0.76 m/s.  Humans walking to a lift can be assumed to have a walking speed of 1.0 m/s [9].  Walking speed is a component of loading time.

Kinetic Energy is defined by the following equation [10]:

The ASME A17.1 code has a kinetic energy limit and velocity limit for Dumbwaiters with Automatic Transfer Devices [11].  An automatic transfer device is defined as “a power-operated mechanism that automatically moves a load consisting of a cart, tote box, pallet, wheeled vehicle, box, or other similar object from and/or to the car”.  The kinetic energy limit is 40 J and the velocity limit is 0.5 m/s during unloading.  These limitations do not apply directly to robots riding with human passengers as passengers do not ride in dumbwaiters.  However, they give some guidance in the lack of a robot specific standard.

A room service robot operating at 0.76 m/s does not exceed the 40J limit.  However, it does exceed the 0.5 m/s velocity maximum.  Therefore, the maximum velocity during loading and unloading should be limited to 0.5 m/s.

Data needs to be gathered by observing loading operations with robots operating at these speeds.  In the absence of this data it would seem logical to add 1.2 seconds to both loading and unloading times when assessing the impact of robots on traffic handling performance. These increased times will increase waiting and transit times.

Personal Space, as it relates to lifts, defines the number of passengers that will ride in a lift at one time.  CIBSE Guide D suggests that an adult male will occupy a space of 0.21 m² [9].  This is based on the male being a European or North American and does not include personal space.

Barney proposes that the design capacity of a lift should be based upon approximately 0.263 m² per person [12].

Research is needed in this area.  However, in the absence of data, a starting point might be to add a buffer zone of 150 mm around a room service robot.  For example, a cylindrical robot with a diameter of 500 mm would occupy, 0.5 m² (space diameter of 800 mm).

Personal space for tug type robots should be different because they will need large lifts due to their mass, physical dimensions, and turning envelopes.  Tug robots will not be considered in the traffic section of this paper.

Room service robots are being installed in an existing 4 Star hotel in California.  A study of the impact of these robots on passenger traffic was conducted.  The following are the building, lift system, and passenger characteristics used for this traffic study. 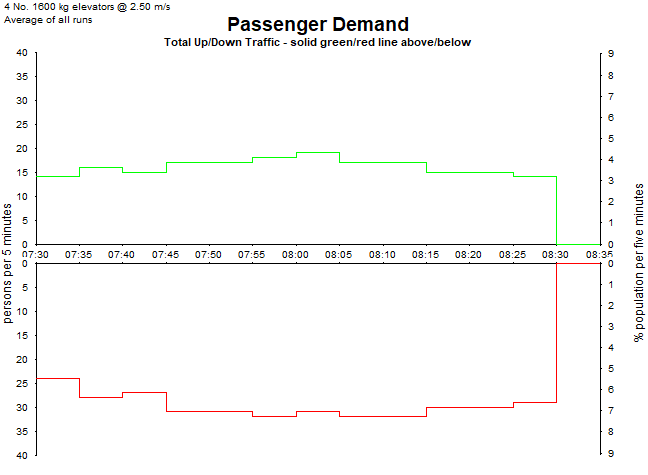 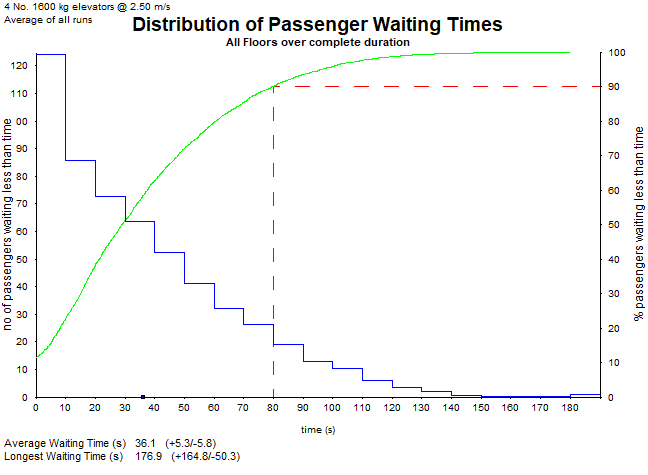 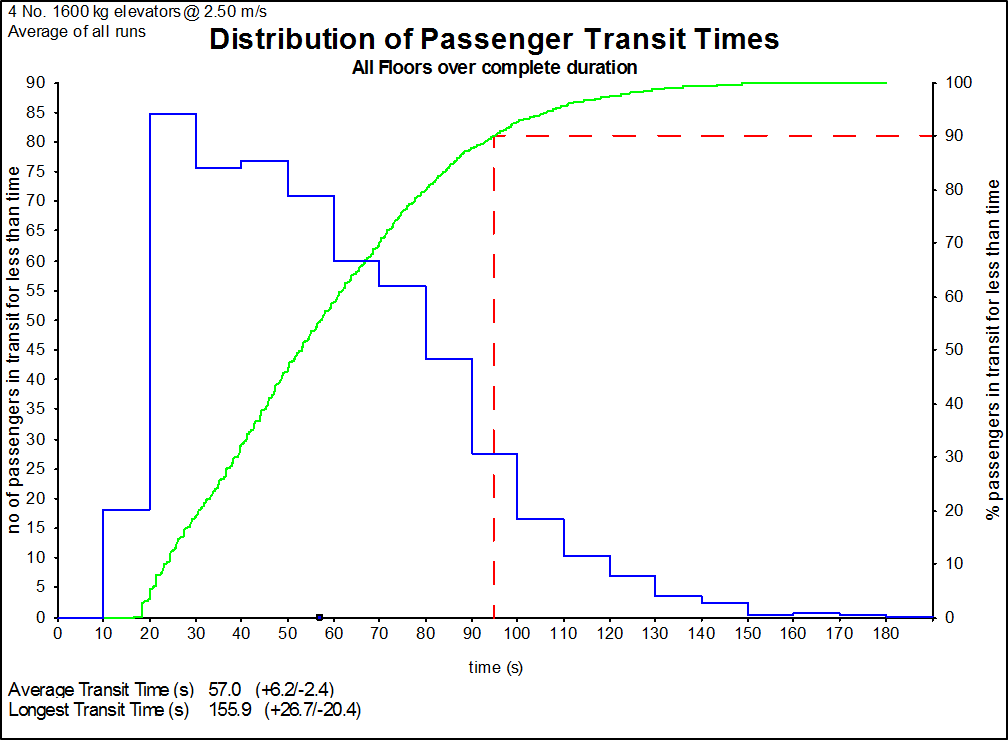 Figures 4 and 5 show the results of traffic simulations using a Peters (CIBSE) Hotel Template with one additional person making a room service delivery.  The one person makes one delivery round trip every 5minutes.  Figure 4 shows Waiting times while Figure 5 shows Transit Times. 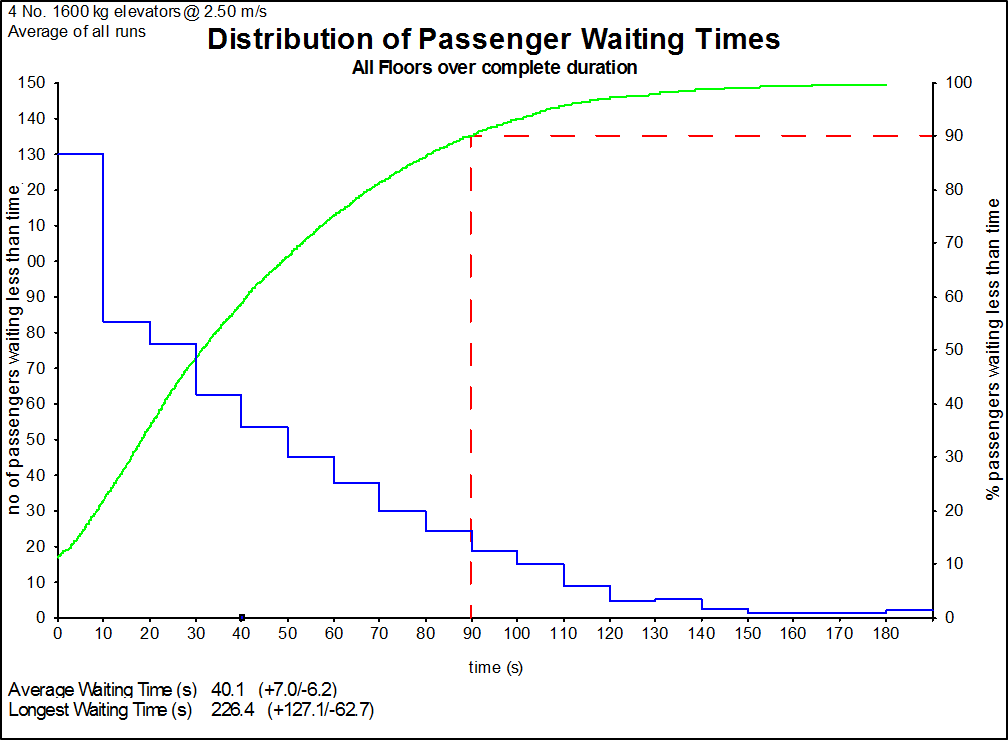 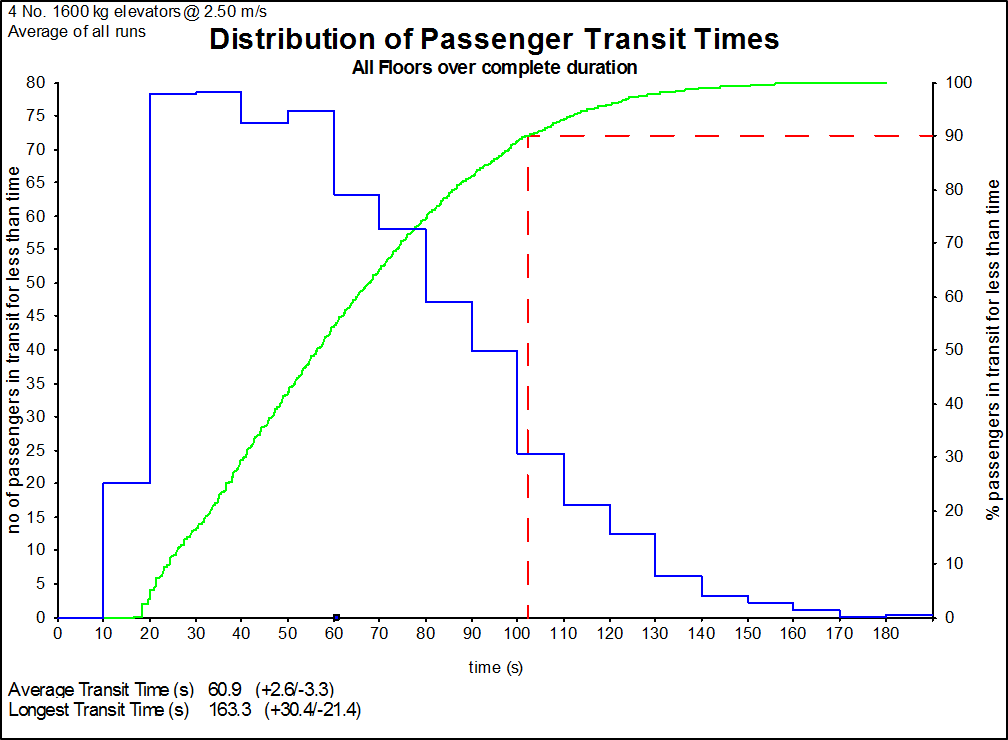 Figures 6 and 7 show the results of traffic simulations using a Peters (CIBSE) Hotel Template with one robot making a room service delivery.  The one robot makes one delivery round trip every 5minutes.  Figure 6 shows Waiting times while Figure 7 shows Transit Times. 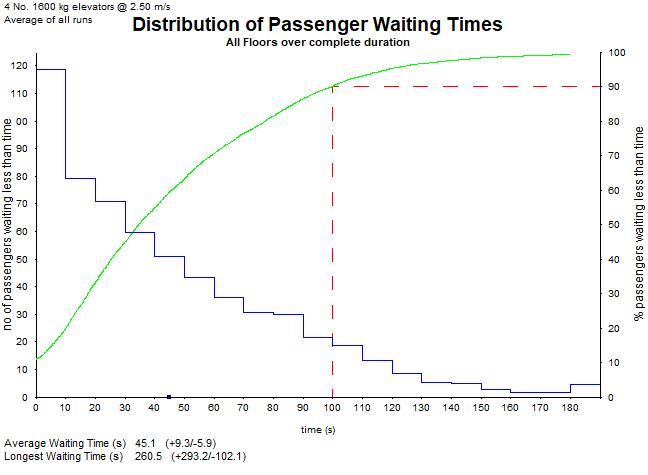 Figure 6 Waiting Times with one robot 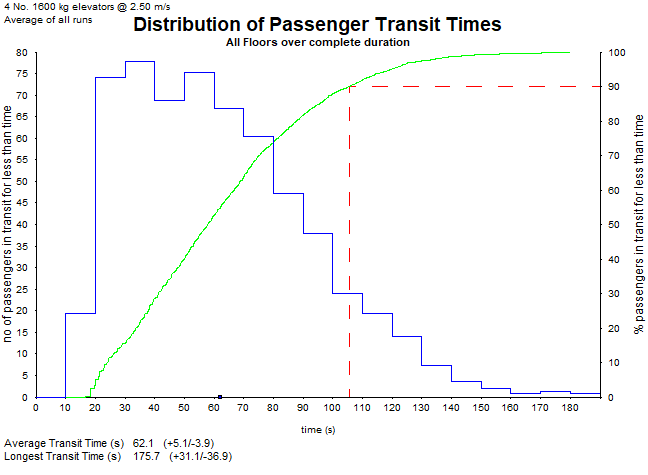 Figure 7 Transit Times with one robot

At present, their speed must be controlled during loading and unloading to either control kinetic energy or velocity.  With continuing improvements in machine vision, robots may become better at avoiding collisions with people and property than humans and these restraints could be relaxed.

More research is needed to understand the human interaction with robots as passengers.  We need to know how much personal separation humans need between themselves and robots.

The speed and personal space characteristics of robots have a negative effect on the traffic handling capacity of lift systems.  If robots are planned for a new building, the proposed lift system should be designed acknowledging these effects.  If robots are proposed for an existing building, a traffic study should be performed that demonstrates the impact of the robots.

The number of robot installations is growing.  Lift traffic consultants need to understand the impact of robots on traffic so they can properly advise their clients.

Rory Smith is Visiting Professor in Lift Technology at the University of Northampton.  He has over 49 years of lift industry experience during which he held positions in research and development, manufacturing, installation, service, modernization, and sales.  His areas of special interest are Robotics, Machine Learning, Traffic Analysis, dispatching algorithms, and ride quality.  Numerous patents have been awarded for his work.