The Application of Simulation to Traffic Design and Dispatcher Testing

This paper was presented at The 3rd Lift Symposium on Lift and Escalator Technologies 2013 in Northampton. This web version © Peters Research Ltd 2013.

Simulation is a popular traffic design tool, but there are many different ways in which it can be applied and the interpretation of results can be difficult. The relationship between round trip time calculations and simulation is explored, demonstrating consistency, but also highlighting why results can be very different.  Simulation templates allow hypothetical and measured traffic patterns to be applied in the selection of lifts for new buildings, and in assessing the benefits of modernisation.  The strengths and weaknesses of popular templates are discussed.  Common misunderstandings are explained. Dispatcher testing can be approached in a similar way to traffic design, but success in sample traffic design simulations does not guarantee consistent performance across a range of traffic conditions and building configurations.  A more comprehensive approach is proposed.

Lift simulation models of varying sophistication have been written and applied since the early 1970s [1].  The continuing improvements in computer technology and software development tools make increasing complex and comprehensive simulation models feasible.  In the late 1990s non-proprietary simulation software for modern operating system became available, making simulation popular and available to most lift companies and consultants [2]. Lift simulation is a very powerful tool.  However it is good practice to start all design exercises with a round trip time calculation [3].

With round trip calculations we model a single, average round trip.  In simulation the whole process of passengers arriving at the landings, registering their landing calls, boarding the lifts when they arrive, registering their car calls and then alighting at their destination is modelled.  Simulation calculates the performance for every call and every passenger.

Simulation can be used to model scenarios that cannot normally be analysed with the round trip time calculations, including:

With general analysis round trip calculations [4] we can analyse:

All these ways of describing traffic can all be applied in simulation.  With round trip time calculations the assumption is that demand is constant; with simulation we can introduce templates which include a time element, see Figure 1.  In this paper we will consider constant and step templates; these are theoretical templates not based on real traffic in buildings.  Then we will consider templates derived from traffic surveys.

Figure 1 Demand may be constant or vary with time

With a constant traffic template the premise is that if a system has a handling capacity of x%, it can sustain that demand indefinitely.  This is directly analogous with the round trip time calculation.

Example 1 Simulation of up peak calculation

Perform a round trip time calculation and simulation for the parameters given in Table 1.  Run the simulation for 30 minutes ignoring the first and last five minutes to allow for start and end conditions.  Apply a group collective algorithm with up-peak mode.

Results are given in Table 2; in this case there is a close correlation between the up-peak calculation and simulation.

Table 2 Result for comparison between round trip times and simulation

To demonstrate saturation, repeat the simulation in Example 1 with the demand increased from 14% to 15% and then to 16% of the building population requiring transportation in five minutes.  Results are given in Table 3.

Table 3 Result for comparison between round trip times and simulation

Notice that with increasing demand the interval remains relatively stable.  Up-peak interval is the time between lift departures from the entrance floor.  For all three results the lifts are departing full from the ground floor.  When the demand increases, there a queue is forming.  So, passengers have to wait more than one interval before they can board a lift.  This is reflected in the rapidly increasing average waiting times and queue length.

When comparing round trip time calculations with simulations, it is important to note:

This template shown in Figure 2 starts with a low demand and increases constantly or, in increments of 1% every period.  The demand can be pure up-peak, or any combination of mixed traffic.  The premise of this approach is that the system’s performance is tested across a range of traffic intensities. 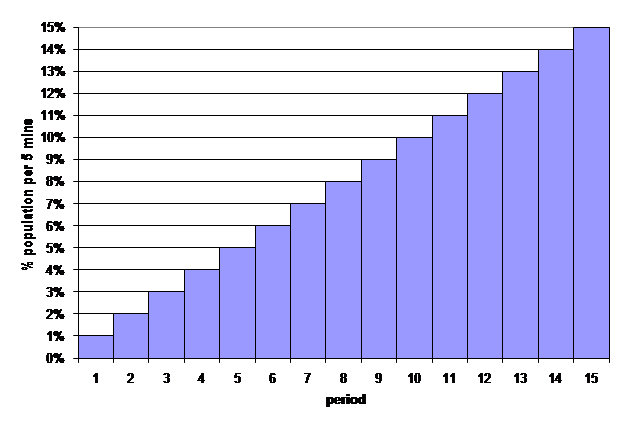 This presentation is useful as it highlights to the customer that the waiting time, loading, and other parameters are dependent on demand.  A system that manages 12% of the design population in 5 minutes may be sufficient in most buildings.  However, if it can transport a greater demand without saturating, it is more likely to manage, for example, if the building population exceeds the design population.  The simulation should continue to at least 1% beyond the design value for passenger demand.

Repeat Example 2 with a step profile.   Begin at 1% demand increasing traffic at 1% increments every 30 minutes up to a maximum of 16%.  Results are given in Table 4. 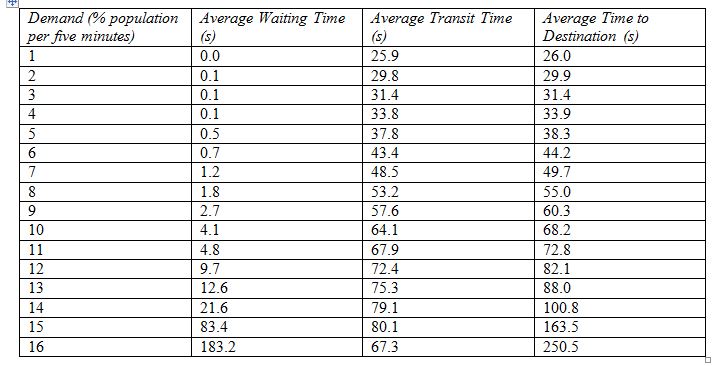 When the demand exceeds the handling capacity (15%), the system becomes unstable.  Up to this point the table provides a good indicator of how the system will perform across a range of traffic intensities.  Note in the close correlation between the waiting times calculated with the constant traffic template and the step profile when the demand is 14%, see Table 5.

The templates presented in previous sections are not intended to represent actual passenger demand in buildings; they are tools to assist designers establish an appropriate design. The most authoritative position when predicting how a proposed lift installation will perform is to design applying evidence based research.  Templates have been proposed which are intended to represent real traffic in actual buildings [5], [6], [1], and Powell for [2].  New design templates for offices were developed [3] to reflect the traffic in modern office buildings, see Figure 3.   Each template represents one hour in twelve 5-minute periods. 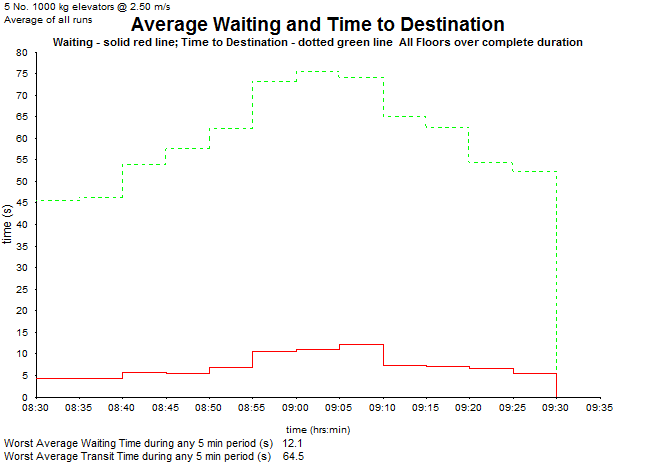 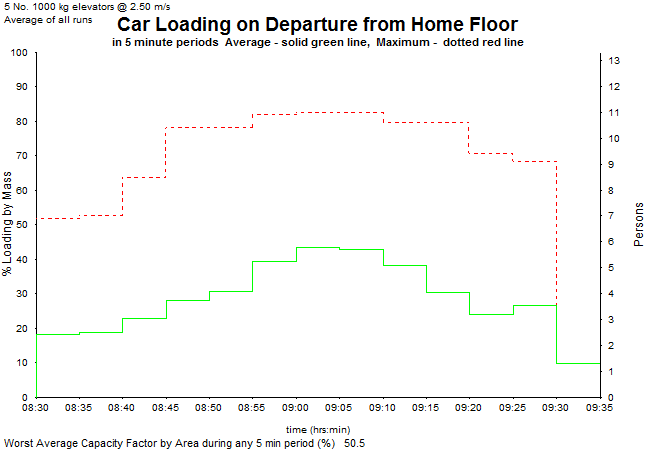 The up-peak loading requirements are for the capacity factor by area not to exceed 80%.  This is met.
Results for the simulations based on the lunch-peak template are given in Figure 6. 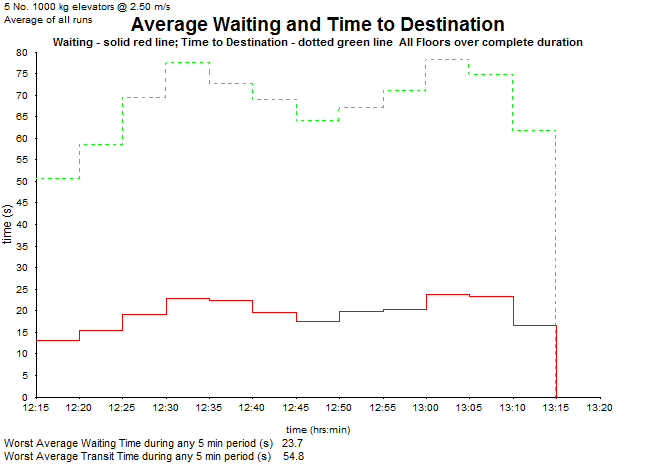 When clients and designers familiar with round trip time calculations first apply simulation, they sometime continue to use interval as a quality of service measure.  This sometimes leads to confusion as interval does not always reflect quality of service.

Interval in an ideal system

Consider a lift system with an interval of 30 seconds.  A lift departs the main entrance floor every 30 seconds as indicated in Figure 7.   If people are arriving at a constant rate, the first passenger shown on the time line just misses the lift.  He or she has to wait 30 seconds.  The final passenger shown on the time line just catches the lift, so waits 0 seconds.  The average passengers wait 15 seconds.  So, in a perfect system the average waiting time is 15 seconds, or half the interval.

Interval across a range of traffic intensities

The scenario characterised in Figure 7 reflects our understanding of round trip time calculations.  In the real word, and with more sophisticated simulation models, the relationship is not this simple.  One way of investigating this is with a step profile.  In Example 3 the up-peak demand increased by 1% every 30 minutes.  Figure 8 shows the corresponding interval with increasing traffic demand. 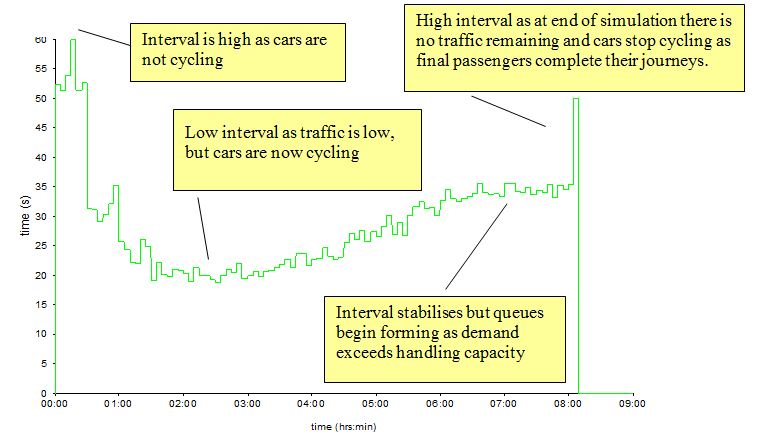 For the same demand profile, consider the plot of waiting time (and time to destination) as given in Figure 9. 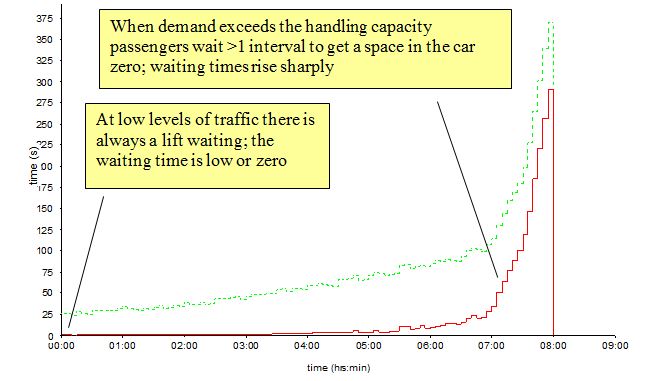 The idealised interval to waiting time relationship we see in Figure 7 only occurs just before the simulation saturates.  Average waiting time proves the better measure of quality of service.

Other difficulties with interval

Non-peak traffic  With low demand, the interval in simulation becomes high as cars are not being dispatched regularly from the main entrance floor; sometimes they are sitting idle, see the start of Figure 8. It is generally accepted [7] that for low traffic scenarios such as residential buildings, simulation is the better tool, and waiting time should be used in preference to interval.

Destination Control   With destination control passengers are allocated to a specific car, so they do not take the next car to depart.  So, even if the interval is 20 seconds, it may be two or three intervals until the car allocated to a passenger departs.  Some early presentations of destination control reported excellent intervals, which were potentially misleading; the interval does not correlate with quality of service with these systems.

Interval is a very useful measure of quality of service in the context of round trip time calculations. In simulation it is an interesting result, but can be confusing without a clear understanding of what is being measured.  If simulation is required, but the design criteria specified is interval, it is advisable to target an equivalent average waiting time.  Barney suggests that the relationship is a function of loading [1] , as also demonstrated in this paper.  Strakosch [6] suggests the relationship is approximately 60%, which is consistent with the author’s simulations at a traffic levels marginally below the saturation point.  Therefore, for example, a target interval of 30 s could be interpreted as a target average waiting time of 18 s.

Most traffic control systems have strengths and weaknesses; the step profile is a good way of testing dispatching strategies, which do not necessarily perform consistently across a range of traffic intensities and traffic split (incoming, outgoing, interfloor).

Weaknesses in the management of outgoing traffic can often be observed in buildings where people are attending a large meeting or event with a fixed end time.

Repeat Example 3 with 100% outgoing traffic.  Run the simulation with a group collective dispatcher with and without the application of a down peak algorithm. 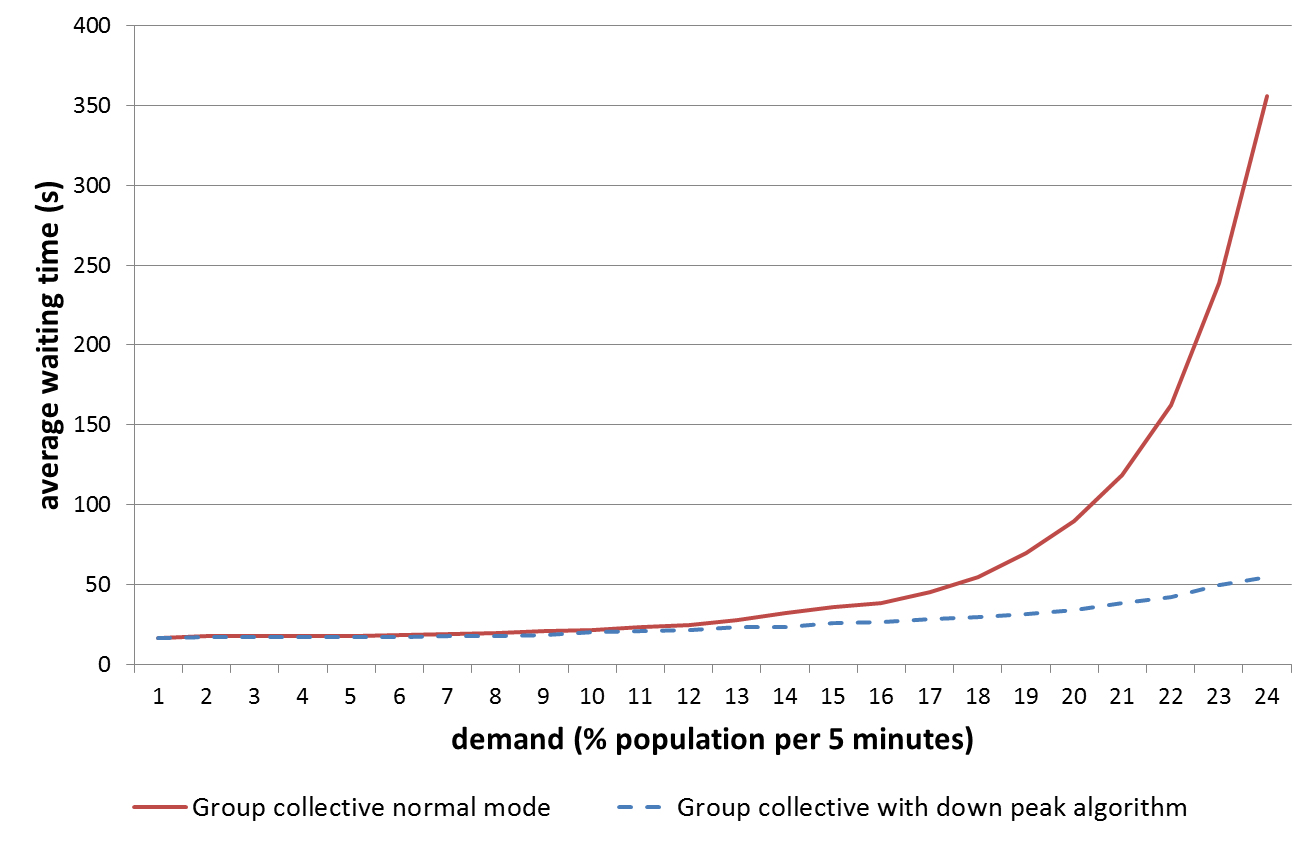 This collapse in handling capacity has been observed in real buildings.  It happens because the dispatcher concept does not consider the saturation scenario.  There are a number of ways of to address this. 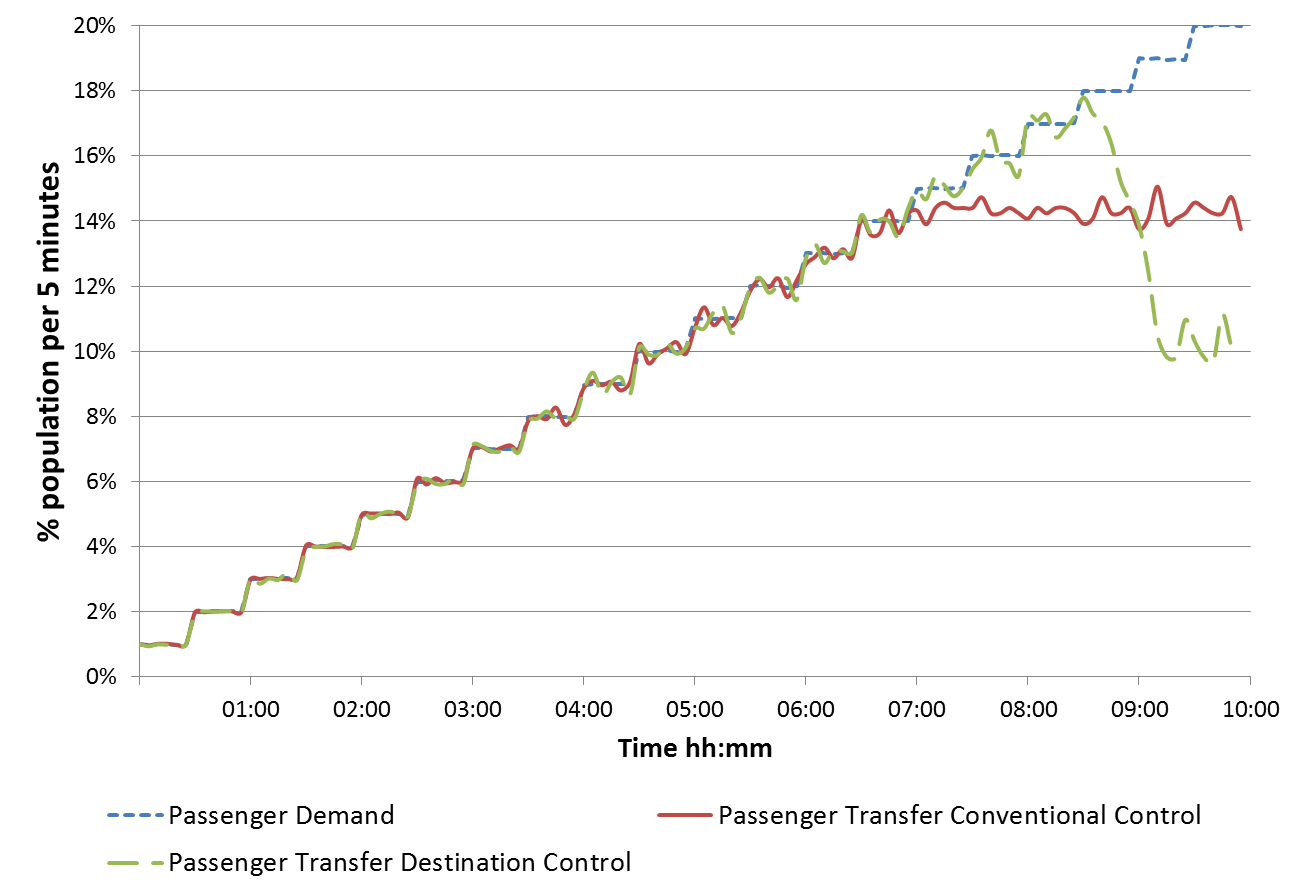 For comprehensive testing, the designer should consider all recognised traffic conditions (up-peak, lunch-peak, and down-peak).  Scenarios should include multiple entrance floors and special floors such as restaurant and conference levels.

In most cases it is best to carry out multiple (typically ten) simulation runs.  This gives us greater sample size with which to generate results that are statically significant.

Multiple runs can be achieved by using different random number seeds with the same arrival rates and destination probabilities.  The demand is the same, but passengers are arriving at slightly different times.  It can be helpful to think of this as modelling different days of the week, Monday, Tuesday, Wednesday, etc.  Results can then be averaged for all the simulations.

Without multiple simulations, the chance element in simulation means that changing a parameter, such as speed or door operating times can sometimes lead to performance results getting worse when it would be expected for them to improve (or vice versa).  For example, if doors times are changed to be slightly slower, in one simulation a passenger may catch a lift which they otherwise would have missed.  This may impact results in one simulation run, but if multiple simulations are performed the advantage of the improved door times will be demonstrated.

The smaller the variation, the greater number of simulations will be required.  For example, if door times are improved by 0.1s, it may be necessary to run fifty simulations to demonstrate that average waiting time is also improved, if only by a fraction of a second.

Simulation is a powerful tool which overcomes the limitations of round trip time calculations.  However it introduces many complexities to do with real operation, which are not captured in round trip models.  Simulations applying a constant traffic template are useful for understanding the relationship between round trip time calculations and simulation; result correlate well if the input assumptions are consistent.  Simulations with the step profile give us a better understanding of how lift systems perform across a range of traffic intensities.  Simulations based on traffic surveys give us more realistic estimates of how planned lift installations will operate, and the basis for a better assessment of the value of different technologies.