Traffic Analysis based on the Up Peak Round Trip Time method. Why it works and how it can be improved

This paper was presented at The 2nd Symposium on Lift & Escalator Technology (CIBSE Lifts Group, The University of Northampton and LEIA) (2012).  This web version © Peters Research Ltd 2019

The Up Peak Round Trip Time (UPRTT) method is based upon a traffic pattern presented by Strakosch in the 1960’s. This traffic pattern and the whole concept of how of how people use lifts has been called “a figment of the imagination” by Barney [1]. Barney goes on to state that “Countless buildings have been designed to its ‘illusion’ and the designs work”.

The science behind the UPRTT method is examined and explained. The correctness of using a traffic estimate that does not initially appear to reflect reality is explored.

The Up Peak Round Trip Time calculation is a method of determining the performance of a lift system during the morning up peak. The proper number of lifts, their capacity and their speed can determined using multiple iterations of this calculation to achieve the desired quantity and quality of service for a proposed building.

Since Up-peak sizing is believed to be an important way of determining the underlying capacity of a lift installation it is important to understand this process.

Up-peak sizing is based upon calculating the round trip time of a lift during the Up-peak period and then using that round trip time to calculate Interval and Handling Capacity. This concept was first postulated by Basset Jones in 1923 and was later refined by Schroeder in 1980 to include a statistical determination of the probable high call reversal floor [1].

The Up-peak Round Trip can be simply described. A lift appears in the lobby and passengers fill the lift to capacity. The lift then deposits the passengers at multiple upper floors. When the lift is empty it returns to the lobby to pick up additional passengers. It should be noted that during this round trip there is neither inter-floor nor downward traffic.

Based upon the car size and the number of floors above the ground floor the number of probable stops that the car will make is calculated using the following equation [3]:

N is the Number of floors above the main floor

p is the number of Passengers per trip

The highest floor that will be reached on a typical trip is a function of the number of floors in a building and the passengers per trip. The high call reversal floor is calculated as follows [1];

N represents the Number of floors above the main floor

p represents the number of Passengers per trip

Using the Round Trip Time (RTT) the Interval (INT) is calculated by dividing the RTT by the number of lifts in a group of lifts. For example, if the RTT for one car in a group of three cars is 90 seconds, then the Interval is 30 seconds. In theory, a lift should arrive at the lobby every 30 seconds if the lifts are perfectly spaced and the actual RTT is equal to the average RTT. The following is the equation for Interval [1]:

NC is the Number of Cars

The average Waiting Time will be one half the average Interval. If the arrival of passengers was equally spaced in time, then the first passenger would arrive just as the lift doors closed and would wait for a length of time equal to the Interval. Likewise, the last passenger to arrive in the lobby would enter the lift just as the lift doors started to close and would have no waiting time. The simplified equation for Waiting Time (WT) is [3]:

Waiting time would be equal to the Interval divided by two if a passenger could enter the first lift that appears in the lobby. However, this is not always possible during the morning Up-peak. For this reason, Waiting Time is assumed to be about 60% of Interval [3].

As previously stated, an Up-peak traffic analysis requires the following:

The first two requirements involve known data, while the third requirement is an estimation. The Up Peak Round Trip Time method is a prediction of lift system performance based on prediction of traffic demand. 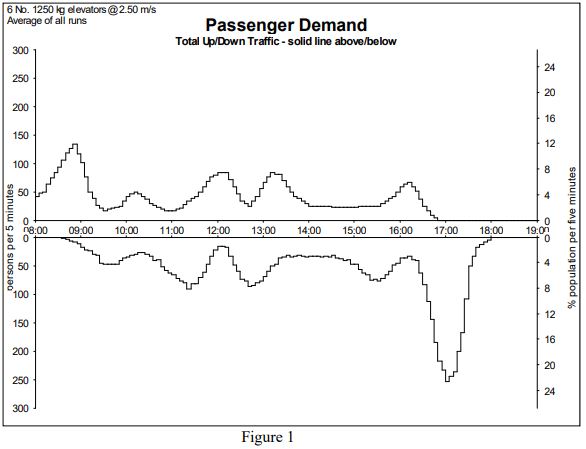 This traffic pattern and the whole concept of how of how people use lifts has been called “a figment of the imagination” by Barney. Barney goes on to state that “Countless buildings have been designed to its ‘illusion’ and the designs work” [1].

The UPRTT system performance was evaluated using a computer program. The results are as

Using the Enhanced UP Peak calculation with 12% demand gave the following results:

Based upon this result one would assume that the proposed lift system would be capable of handling 12.0% of the building’ population during Up Peak conditions. However, when a simulation was run using a dispatching algorithm employed by an early microprocessor based control system with an arrival rate of 12%, the system saturated as can be seen in Figure 2. This dispatching algorithm most likely performed at a level similar to a good relay based system. 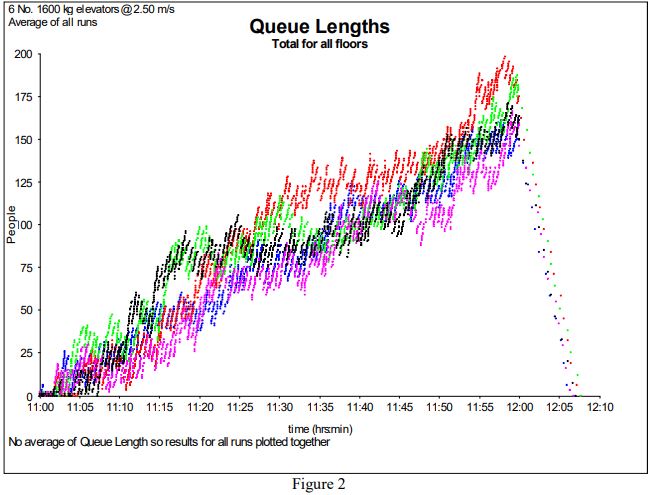 Figure 3 shows the results of a simulation of the up peak performance of the same lift system in the hypothetical building at a 10% demand level. 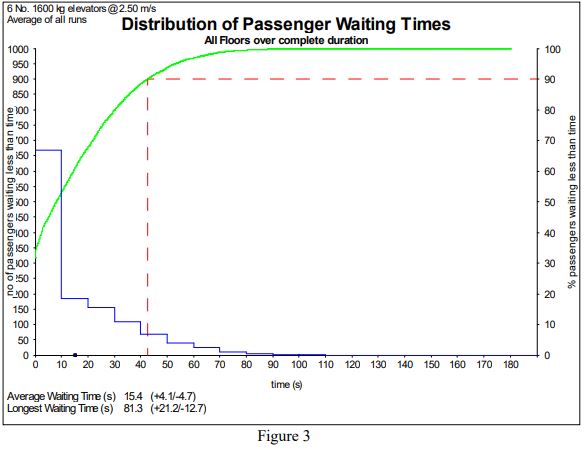 The difference between the demand level used in calculations and the real traffic levels can be viewed as a Safety Factor.

Safety factors in industrial design are selected based upon the risks involved, the variability of the component, wear estimates, and the accuracy of predictions used in the design. Wire ropes for lifts require a minimum safety factor of 12 [5]. However, some aircraft components have a safety factor of 1.2 [4].

The UPRRT method is based on the traffic pattern shown in Figure 1. The UPRTT method is a calculation tool. The designs developed by this tool work because the designs are based on a safety factor created by the 5 minute handling capacity selected. A design with a 5 minute handling capacity of 12% has a safety factor because the true traffic that the lift system will encounter will be less demanding than 12% of the building population, all traveling upward.

The UPRTT method has been shown to require more lifts that would be required if simulation were used to calculate the required number of lifts for proposed building [7].

As an example of this, the hypothetical building that required 6 lifts based upon the UPRTT method was evaluated based upon applying 5 high performance lifts using simulation and the modern estimates of traffic presented by Peters in CIBSE Guide D [8]. Figures4 – 7 record the performance of the 5 lifts during the modern Up-peak and the modern Lunch. 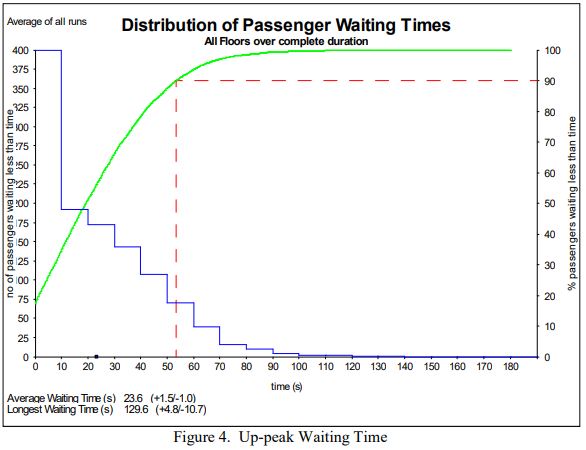 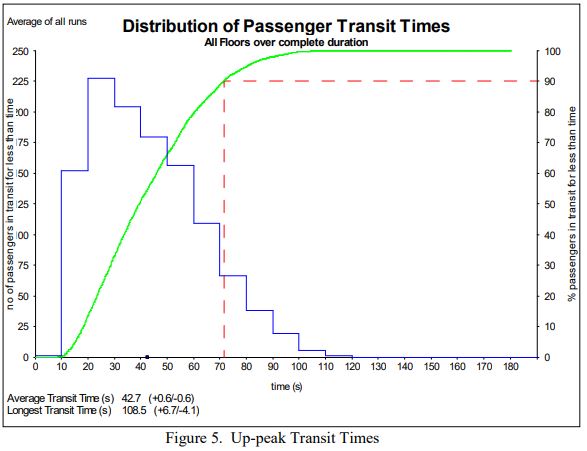 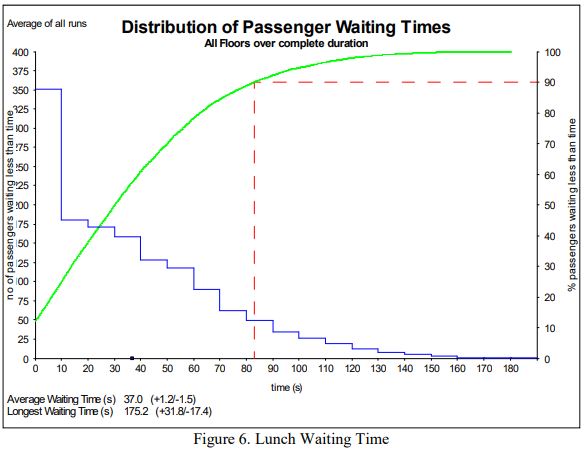 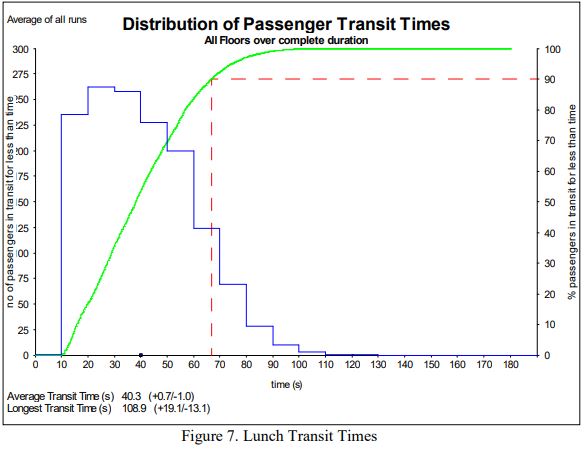 The waiting times for the 5 car high performance group are between a 4 star and a 5 star building according to the Quality of Service criteria in the 2010 edition of CIBSE Guide D [8].

The transit times for the 5 car high performance group are between a 6 star and 7 star building.

The inclusion of a Safety Factor explains why the UPRTT method works.

A building with fewer lifts is more economical and more sustainable.