This paper highlights some of the discrepancies between traffic calculations and real world measurements.  Unless everyone is clear what is being assumed in traffic calculations, and what the reality is, discrepancies can have major consequences resulting in excessive waiting times and queues.  The topics considered are population, passenger demand, lift capacity, performance time, dwell times and destination control systems.

This paper reflects many years of supporting clients who are confused and frustrated that the performance of their lifts do not reflect the promises of the traffic calculations (round trip time and simulation) originally provided.  It highlights some of the recurring themes in comparing traffic calculations with real world measurements and observation.

The examples are anonymised and from a range of suppliers.  No criticism of any specific company is intended.   However, as an industry we need to be more open and transparent in our traffic calculations to retain the trust of our customers.

Traffic design calculations have to make assumptions about the building population and peak passenger demand.  Every building population is unique and changes over the building lifetime.  There is no “correct” passenger demand criteria that can be applied to all office buildings or all residential buildings, etc. but there are reasonable assumptions about worst case demand that can be made to reduce the risk of a poor lift service [1].

Figure 1 shows a range of passenger demands measured by manual survey in major office buildings (with a population of over 1000 people) [2].  As most designers assume a passenger demand towards the higher end of actual measurements, the risk of under-lifting a building is mitigated; in most instances the passenger demand will be less than the design assumption.

In many instances using a worst case estimate for passenger demand hides other over-optimistic traffic calculation assumptions, as discussed in later sections.  This means that some “under-lifted” buildings work.  However, there is a risk that over the building lifetime the worst case demand is realised, at which point other optimistic assumptions are exposed. 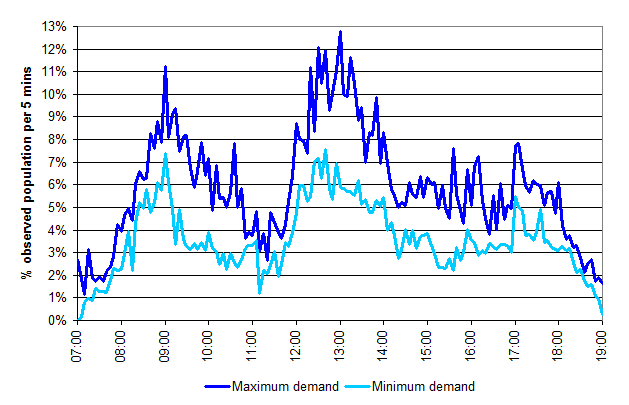 With a traffic survey and performance measurements is possible to demonstrate consistency between simulation and reality [3].

It is common for lift traffic calculations to assume that cars load based on an estimate of passenger mass.  So, for a 1600 kg lift, assuming 75 kg per person, the maximum loading is 21 persons. Is this realistic?

Peak car occupancy before passenger refusals can be measured during in-car traffic surveys.  The observer is counting passengers in and out of the car at each floor.  He or she can record when a passenger is waiting outside the lift, but decides not to load because the car is too full – a refusal.  Results are presented as shown in Figure 2 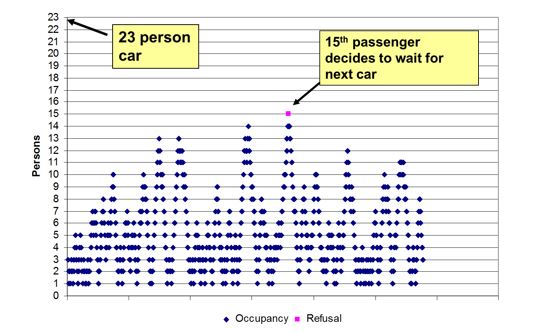 Consider how a passenger decides whether or not to load a car.  In reality, he or she looks for space rather than carrying out a mass based load assessment.

Some designers would assume a maximum car loading of 21 persons in simulation, but the reality was 14 persons.

Current survey results for maximum loading range from 0.19 to 0.24 m² per person.  At 0.19 m² per person the lifts are so crowded that it is unpleasant to travel; people load at this level when the waiting times are very long, and they are desperate to get into the lift.  At 0.24 m² per person the people are used to a premium lift service, so passengers will wait rather than compromise their personal space.

Given the range of measurements, the 0.21 m² per person figure proposed in CIBSE Guide D [1] is reasonable, although it may vary according to country and culture.

Calculating the maximum number of passengers using rated load (kg) can lead to there being insufficient handling capacity as not all lifts with the same rated load are the same size; some are a lot smaller.  Furthermore, EN 81-1/2 allows less area per kg for larger lifts so mass based calculations are less reliable for larger cars.

Performance time is a measure of how long it takes for a lift to travel between floors, see Figure 3.  It includes:

Performance time can be modelled in traffic calculations through the application of lift kinematics.  Formulae can be used to calculate travel times and to plot the distance travelled, velocity, acceleration and jerk (rate of change of acceleration) against time [6], see Figure 4. 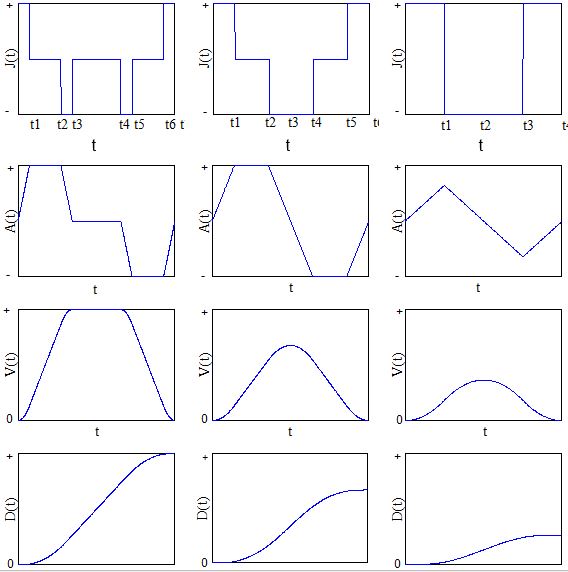 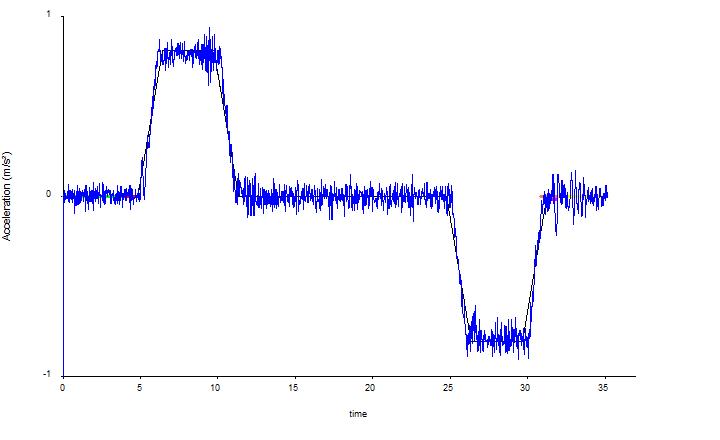 At the planning stage designers normally assume excellent, but achievable lift performance time parameters.  Sometimes there is a temptation to use difficult to achieve, enhanced figures to meet a target waiting time or time to destination criteria.  Table 1 shows the performance time assumptions of one traffic calculation, compared with a measurement of the installed equipment.

Figure 6 plots the design performance for a sample trip (46.8 m), overlaying the measured velocity profile.  The total performance time for this single trip is 3.7s longer in reality than was assumed in traffic calculations. 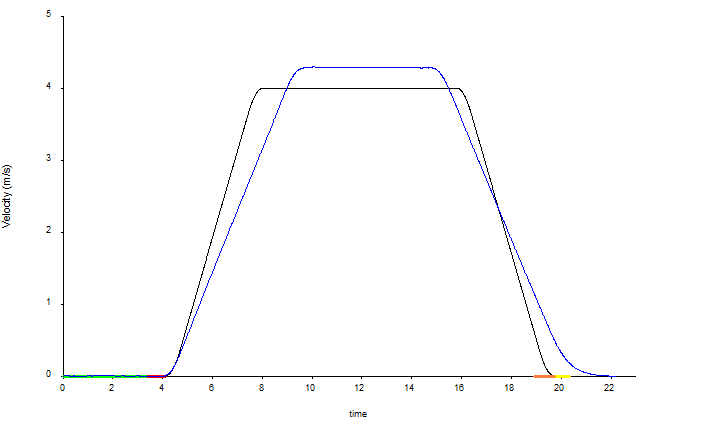 In specifying a lift installation is it important to include the required performance parameters individually, as listed in Table 1.  In variations provided with tenders, the customer should recognise that it is the combination of all the parameters which is ultimately is the most important; for example, an additional 0.5s start delay may be offset by doors which close 0.5s faster.  All parameters should be checked as part of the commissioning process, and monitored during the lifetime of the installation to ensure the design assumptions are maintained.

Historically door dwell times have not been accounted for in round trip time traffic calculations.  In simulation designers often apply dwell times of less than one second.  In reality dwell times are often between two and four seconds.

To ensure the quality of service presented in traffic calculations is deliverable in the real world realistic dwell times should be used.

Figure 7 shows the actual population in an office building measured by observers carrying out a manual count. The observed office population rises to a peak late morning and then drops over lunch time.  Most people return after lunch, and the building is virtually empty by 10 pm. 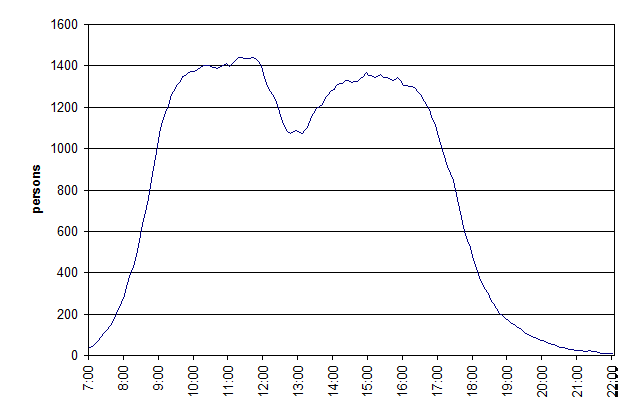 With destination control, every passenger is assumed to register his or her own call. Logging these calls provides an easy way of counting people and analysing quality of service (typcially average waiting time and average time to destination).

An observed building occupancy can be generated from the destination call log.

This is an extreme example, and normally the discrepancy between incoming and outgoing calls is less dramatic with destination control.  However it highlights that an analysis of the destination call log to generate an observed building occupancy plot can reveal underlying issues with installed systems.

In simulation, one destination call per passenger is normally assumed.  Any major discrepancy between the total incoming and outgoing calls will compromise a comparison between simulation results and the traffic study report by the traffic control system. 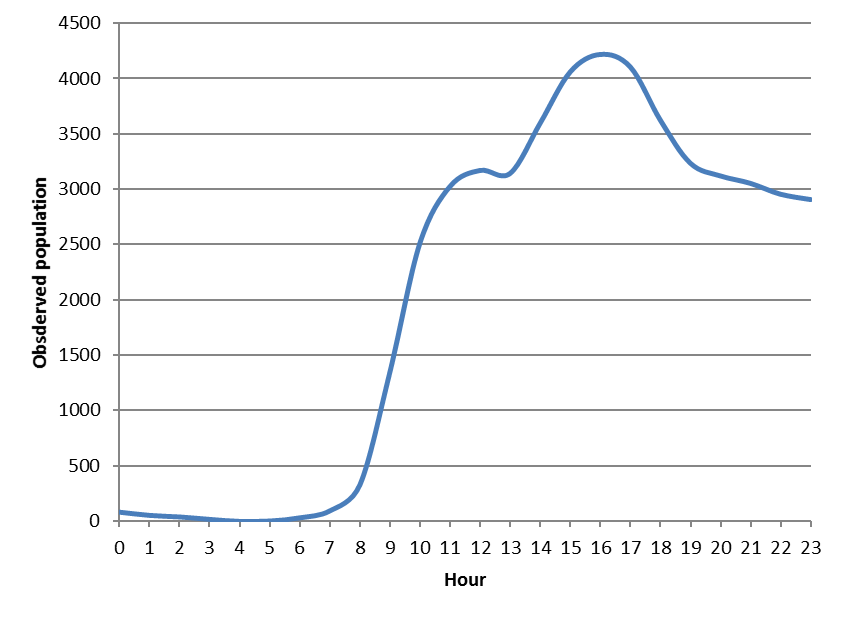 Another compromise in the traffic study reports can occur when there are a high number of refused destination calls. Refused destination calls occur when the lifts are overloaded and the traffic control system asks the passenger to wait before re-registering their call.  By constrast, in simulation, the passenger waiting time commences when the passenger first registers his or her call.  If the system is unable to allocate a lift, the waiting time is still being counted for the analysis.

In real installations if the system is unable to allocate a lift, there is noramlly no log of destination calls.  The time the passenger is waiting before they manage to register a call is lost, and the traffic study reports provided by the traffic control system are compromised. To ensure the traffic study reports are not affected by this issue, the traffic control system should include refused destination calls in their log, and provide reporting which summarises the volume of refused calls.

The recurring issues found in this work have been design calculations which assume unrealistically high car loading and over-optimistic performance times.

In some instances, the “solution” offered for an under-lifted building is an intelligent traffic control system.  However, in many cases the most effective approach is to improve performance time.  Destination control systems are well known to boost up peak handling capacity, but are not a panacea for all under lifted buildings.  In some instances, the application of destination control can even be detrimental [8].

Destination control can provide a log of destination calls and traffic reports which can assist in comparing simulation with real world performance.  However, this data may be misleading in cases where there is mismatch with the assumption of one call per passenger.  Furthermore, in an overloaded system refused calls can be overlooked.

As an industry we need to be more open and transparent in our traffic calculations to retain the trust of our customers.   The author favours a design approach which is based on realistic assumptions of peak traffic demand, achievable car loadings and performance times [1] [Section 4].

Richard Peters has a degree in Electrical Engineering and a Doctorate for research in Vertical Transportation. He is a director of Peters Research Ltd and a Visiting Professor at the University of Northampton. He has been awarded Fellowship of the Institution of Engineering and Technology, and of the Chartered Institution of Building Services Engineers. Dr Peters is the author of ElevateTM, elevator traffic analysis and simulation software.