This paper was presented at The 10th Symposium on Lift & Escalator Technology (CIBSE Lifts Group, The University of Northampton and LEIA) (2019).  This web version © Peters Research Ltd 2019

Abstract. The Monte Carlo Simulation (MCS) method has been successfully applied in lift traffic systems to evaluate a number of different parameters such as the round-trip time and the average travelling time; and under different conditions, such as sectoring control and for multiple lift cars running in the same shaft.  Using the MCS methods is particularly effective in cases where the number of possible combinations becomes too complicated for analytical equation-based calculation methods to deal with.

This paper attempts to extend the applications of the MCS method in two areas:  Car capacity and drive-motor system sizing.  It uses this method to compile the probability density functions (PDF).

The second area involves using the same data in order to compile a load profile of the number of passengers inside the lift car when it stops at a certain floor and when it departs from the that floor, along with the probability of the lift car stopping at that floor.  This provides a strong input to simulate the drive-motor system and evaluate the temperature rise in the windings and the power electronic devices.

A numerical example is given for a single lift car to illustrate the application of the method.

Based on the expected mix of traffic, the so-called origin-destination (OD) matrix can be developed that concisely describes the probability of a passenger travelling from one floor in the building to another floor.  Well established procedures have been developed that allow the compilation of an OD matrix from the floor population percentages, the entrance bias and the mix of prevailing traffic [10, 11].  A more generalised procedure that allows any floor to simultaneously be an entrance floor and an occupant floor has been recently published [12].  Research has also been carried out on the reverse procedure (i.e., estimating the traffic mix from the lift movements resulting from passenger origin-destination pairs) as shown in [13, 14, 15, 16].

The most important application of the OD matrix is in the random generation of passenger origin-destination pairs within simulation software packages or for the purposes of MCS.  The full procedure is clearly documented in [17] as an integrated framework.  When using the MCS methods to simulate a full round-trip, a number of passengers, denoted as P passengers, are generated (denoted as Pgen).  Generating a passenger in this context involves finding the origin-destination pair for that passenger.

It is also possible to generate random arrival times for passengers (i.e., generating passengers in time) assuming a Poisson passenger arrival process [18].  However, this is beyond the scope of this paper.  Potentially, this could further affect that probability density function (PDF) as the additional randomness of the arrival time of the passengers is considered (i.e., too many passengers arriving in a period of time, or too few).

In this paper, the MCS method is used in order to develop a detailed description of the car-load in the lift car at every start or within the whole round-trip under conventional group control but assuming general traffic conditions.  As the car-load is a random variable (especially under general traffic conditions) then it is best described as a probability density function (PDF).  The advantage of describing the car-load in the car in consecutive round-trips, using a PDF, is that it is possible to understand the scatter of the values of the car load in units of passengers and then make an informed decision on the car capacity (CC).

A similar comment can be made regarding the sizing of the drive system.  A detailed understanding of the load inside the car at different positions in the shaft, can help the designer make an informed assessment of the temperature of the electrical drive system and the traction motor.

It is worth noting that the definition of the type of traffic as incoming, outgoing, inter-floor or inter-entrance assumes that any floor can be classified as either an entrance/exit floor or an occupant floor, although the procedure followed in this paper has made the simplifying assumption that any floor is either an occupant floor or an entrance/exit floor.

Section 2 discusses the motivation for developing this paper.  The random nature of the passenger generation process is discussed in Section 3.  Section 4 reviews in detail the procedure for preparing the cumulative distribution function (CDF) from the probability density function (PDF) and then using it to randomly generate passenger journey origin-destination pairs.  A detailed numerical scenario is analysed in Section 5.  Section 6 contains some PDF results for the car loading and the drive loading at different floors (up and down).  Conclusions are drawn in Section 7.

2.  Motivation for this paper

It is recognised that as the traffic mix becomes more balanced between incoming traffic and outgoing traffic, an opportunity exists to exploit this balance by increasing the number of passengers generated in one round-trip

The question that this exercise answers is formulated below:

Answering the first part of the question helps the designer decide on the suitable car capacity for a certain mix of traffic.  Ultimately, it could allow the designer to keep the car capacity at its value but scientifically deal with larger handling capacities under balanced mixes of traffic.

3. An important note on the random nature of the passenger generation process

4.  Generating the passenger origin-destination pairs from the CDF

1.   Obtaining the nature of the floors in the building as follows:

a) Whether a floor is an occupant floor, an exit/entrance floor or both.

b) The percentage of passenger arrivals/departures from an entrance/exit floors (sometimes referred to as “entrance bias”).

c) The ratio of the populations of the occupant floor (the actual number is not required; simply the relative strength).

d) The mix of traffic, expressed as percentages of decimal fractions adding up to 1, as follows: incoming traffic, outgoing traffic, inter-floor traffic and inter-entrance traffic.

3.   Converting the origin-destination from a PDF to a CDF by integration.  An example of a CDF for the building used as an example in this paper is shown in Figure 1. This building has 8 occupant floors with equal populations and 2 entrance floors with ratio of 30%:70% for the basement and the ground respectively. The traffic mix is representative of lunchtime traffic (45% incoming: 45% outgoing: 10% inter-floor).

4.   Carrying out random sampling in order to generate the origin-destination pairs.  The random sampling consists of generating uniformly distributed random numbers between 0 and 1 and applying them to the CDF produced in the previous step (shown in Figure 1).

6.   Finding the stops during the round-trip.

7.  Calculating the number of passengers in the lift car when it departs from the floor at which a stop occurred.  This number represents the load inside the lift car.

10.  The values of the car loading from each of the ‘n’ trials are then analysed in order to produce a PDF for the maximum car loading in a round-trip, the load in the car when it starts at each floor.

As an example, on the above, taking a lift with a car capacity of 9 passengers and assuming that the passengers will be willing to fill it up with 9 passengers where possible.  It will be insightful to examine the following two different cases:

The first case is pure incoming traffic (i.e., 100% incoming traffic: 0% outgoing traffic: 0% inter-floor traffic).  As the building has two contiguous entrances, then the 9 passengers will originate at one of the two entrance floors (basement and ground in this case).  Thus, as the lift car departs from the ground floor, it will have 9 passengers on board, regardless of the origins or destinations of the passengers.  Therefore the lift car will fill up to its maximum capacity in every round-trip.  There is nothing to be gained from analysing the various random scenarios, as the car will fill up with 9 passengers in every round-trip.

An alternative scenario is where the traffic in the building is mixed (e.g., lunchtime traffic:  45% incoming: 45% outgoing: 10% inter-floor).  In this case, the maximum load in the car will vary from one round-trip to the next and will rarely attain the value of 9 passengers.

Table 1:  The origins and destinations of the 9 passengers.

As can be seen in the table, there are 4 inter-floor passengers, 2 outgoing passengers and 3 incoming passengers.  The full journey is now analysed in terms of stops and passengers in the car throughout the round-trip as shown in Table 2.

Table 2:  Analysis of one full round-trip to obtain car loading. 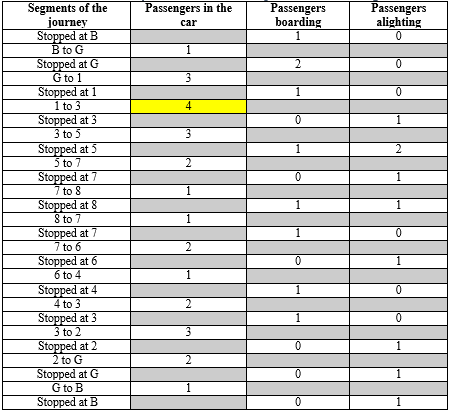 The same round-trip analysis is also shown in a diagrammatic format in Figure 2. 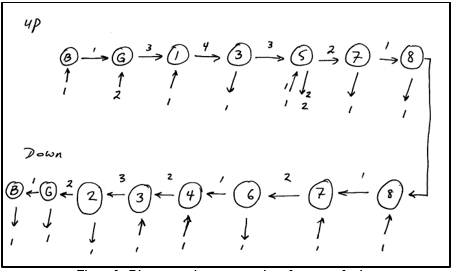 Figure 2:  Diagrammatic representation of one round-trip.

In this section, a sample of the results that are obtained from the MATLAB software are reviewed.

A sample building that has 8 occupant floors above ground and two entrance floors (basement, ground) is used. It is assumed that the occupant floors have equal populations.  It is worth noting that the software does not require the actual floor population; it simply needs the ratio of the floor populations.  The software also needs the entrance bias for the two entrance floors (in this case assumed to be 30%:70% for the basement passenger arrival rates).  The traffic mix is assumed to be a typical lunchtime traffic (45% incoming: 45% outgoing: 10% inter-floor).

The Monte Carlo Simulation was run for 1000 trials, with 8 passengers generated in each round-trip.  The number of passengers in the car at every start at each floor was recorded to be later processed.  The data was then processed to produce the following: 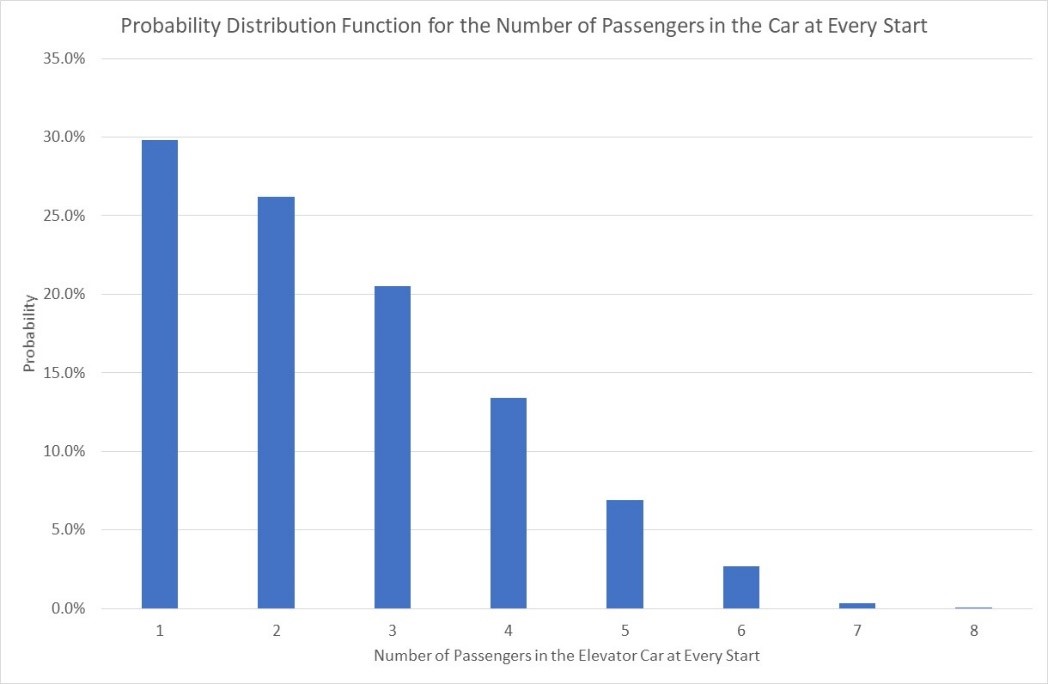 Figure 3:  The PDF results for the number of passengers inside the car at every start, in units of passengers and at a lunchtime traffic (45% incoming: 45% outgoing: 10% inter-floor). 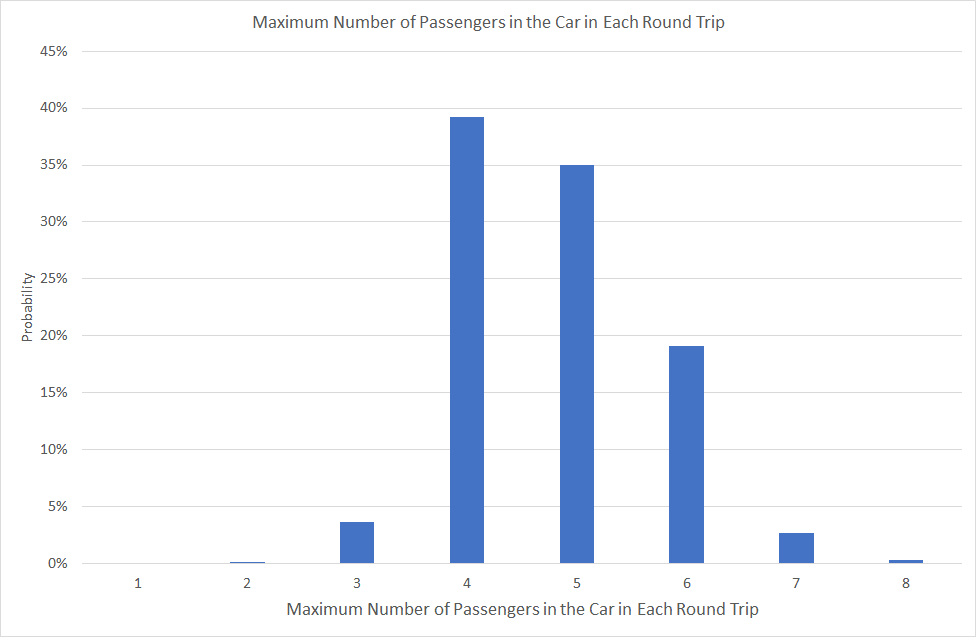 Figure 4:  The PDF results for the maximum car-load for 8 generated passengers in a round-trip and lunchtime traffic (45% incoming: 45% outgoing: 10% inter-floor).

The Monte Carlo Simulation method has been successfully used in order to extract the load inside the car when it started at each floor and the maximum car-load in the lift car under general traffic conditions.  This relied heavily on the origin-destination matrix probability density function (PDF) which was converted into a cumulative distribution function (CDF) and then used to randomly sample passenger origin-destination pairs.

The results can be used to assess the suitable car capacity under mixed traffic conditions.  They can also be used to simulate and model the thermal performance of the drive system and the traction motor.

Lutfi Al-Sharif is currently professor of building transportation systems at the Mechatronics Engineering Department at the University of Jordan, Amman, Jordan.  His research interests include elevator traffic analysis and design, elevator and escalator energy modelling and simulation and engineering education.  He is also a visiting professor at the University of Northampton and a Consultant at Peters Research Ltd.

Stefan Gerstenmeyer has many years of experience in R&D for lift controls, group and dispatcher functions/algorithms, including traffic analysis and multi car lift systems. He is working as Chief Engineer/Head of Traffic and Group Control at thyssenkrupp Elevator. He has a degree in information technology and a PhD in Engineering from the University of Northampton.

Jens Niebling holds a degree in electrical engineering and is currently a software engineer with thyssenkrupp.  He is part of the team working on traffic concepts for MULTI. He also has several years of experience in the development of frequency converters.

Maria Abbi is a Research Assistant at Peters Research Ltd on a gap year placement having studied Maths, Further Maths, Physics and Chemistry at Wycombe High School. She is currently studying a course in Aeronautical Engineering at Imperial College London in September 2018.